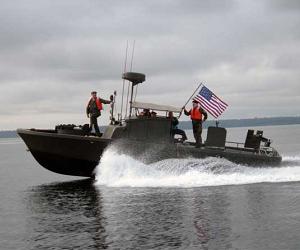 Some guys get their jetboat training the hard way-during the war in Vietnam on the Mekong Delta and along the Cambodian border in the Navy’s River Patrol Force.  Ed Vick operated Navy PBRs, 35′ vessels which were very early applications of water jet propulsion  in commercial craft.  In fact, the boats were built in Washington state on converted pleasure craft hulls and utilized jets by Jacuzzi, but they met the Department of Defense needs for shallow-draft boats that were fast.  Powered by twin GM 225 hp diesels PBRs attained speeds up to 25 knots, fast by the standards of the day. Ed Vick’s unit was awarded the Presidential Unit Citation, the highest honor a unit can earn for bravery in combat.  Click here for a link to Slinghot on Amazon.

« Throwback Thursday circa 1959
Mr. Fitzpatrick Goes to Washington »
We use cookies to ensure that we give you the best experience on our website. If you continue to use this site we will assume that you are happy with it.Ok